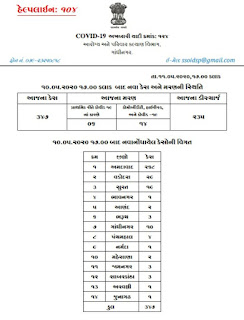 In Gujarat, 347 more cases of corona have been reported today means in the last 24 hours. So in one day, a total of 20 patients have died due to corona. While 235 patients have been discharged from the hodpitals today. The total number of corona positive cases in Gujarat is 8543. So the total death reported in the state is 513. So the total number of discharge cases in the state is 2780.

The total number of positive corona in Gujarat is 8542. 31 of them are on ventilators. So 5218 people are stable. While a total of 2780 people have been discharged. And the total death toll is 513. Six of the 20 deaths reported today were primarily caused by corona. So in 14 deaths the patients had another type of serious illness. So out of 20 deaths, most deaths have been reported in Ahmedabad. In Ahmedabad, 19 people died due to corona today while one patient died in Mehsana.

Talking about discharge cases today, 109 patients have been discharged in Ahmedabad, 7 in Anand, 2 in Botad, 1 in Gandhinagar, 4 in Mahisagar, 17 in Mehsana, 6 in Panchmahal, 1 in Patan, 16 in Rajkot, 65 in Surat and 7 in Vadodara. A total of 116471 persons have been tested in Gujarat so far. Out of which 8542 people have tested positive for corona.